You are here: Home1 / The project2 / Committed Territories

This project is carried out transnationally, as it comes in response to common challenges for the European Union : energy and environmental policies, civic engagement, equality for access to training and preservation of resources in the territories.
Coordinated by a French cooperative company specialising in energy and sustainable development called les 7 Vents (the seven winds), the project is supported by a consortium made up of versatile and complementary partners : Greeks of the MCE, Italians from the CESIE, Croats from UDRAGA BRAC, and French from iniSeo.

In Sicily, eco-sustainable tourism (eco-tourism) is closely connected to the environmental and socio-economic causes as it embraces a whole supply chain not only of tourism activities but also of local productive activities that thrive on tourism, linked to the agricultural food sector and viticulture, craftsmanship, tangible and intangible cultural heritage. These activities also encourage the preservation of the environmental heritage, the promotion of local specialties and the respect for the territory.

“Rural tourism” is very widespread in Sicily especially in the countryside and non-urban areas, small villages and historical ones, but also mountain tourism in green areas and natural parks. Sicily currently has several tourist structures that promote biodiversity and they mostly adopt the European Union “eco-label” criteria for energy efficiency, eco-design and the use of low-polluting and eco-friendly materials.

On a broader scale, Italy holds 55 UNESCO World heritage sites, fabulous beaches and top ski routes. Its economy depends on tourit’s attendance with approximately 4.2 million of the population employed in the tourism sector, making up 12-13% of the country’s GDP (Gross Domestic Product)

Mount Ossa, alternative Kissavos (from South Slavic kisha “wet weather, rain”), is a mountain in the Larissa regional unit, in Thessaly, Greece. It is 1,978 metres (6,490 ft) high and is located between Pelion to the south and Olympus to the north_ the highest mountain in Greece, known from the greek mythology as Gods Residence_ separated from the latter by the green Vale of Tempe ending on the Pinios River Delta .
In Greek mythology, the Aloadaes are said to have attempted to pile Mount Pelion on top of Mount Ossa in their attempt to scale Olympus.
The dense forests of fir trees, beeches, oaks, chestnuts and its abundant waters, give a poetic grandeur and characterize the area as a Botanical Garden with many waterways, lakes and gorges.
An area of ​​16,900 hectares in the NE part of the mountain has been characterized as Aesthetic Forest and joined the European Protection Network NATURA 2000, as an area of ​​exceptional natural beauty.

The visitor can find there many traditional and picturesque mountain villages, Byzantine and Post-Byzantine monuments, and apart of the territory is located near the Aegean coastlines with pebbly and sandy beaches.
The tourism sector is composed of family hotels and other accommodation, traditional taverns, cafes, outdoor activities like trekking and horse riding and many local producers.

Brac island is one of the three largest Adriatic islands. It’s located at the opposite of Split, Omis and Makarska, bounded by the Brac canal on its north side and by the Hvar canal on its south coast.

The island is characterized by a tormented relief which culminates in Mount Vidova Gora (778 m), which is the highest peak of the Adriatic islands. This is why the climate on the inner side of the island is continental, while along the coastline the climate is typically Mediterranean. This brings on a very diverse landscape over a small area of 400 square kilometers, and makes the island of Brac  a very unique environment.

There are 20 villages on the island, most of which are located by the sea and represent the typical sight of Brac.The villages in the island’s interior look different from ones in the coastal area, because of the relief and the predominant economic fields.

Tourism represents the greatest economic potential for Brac today. The natural diversity of the island opens up many opportunities for the development of tourism, and all economic activities are compatible with sustainable tourism (agriculture, stone mining and processing, fishing industry, etc).

A “land of freedom, authenticity and sharing” : that’s how Normandy’s tourism office likes to sum it up. Freedom because of its large protected natural areas that invite you to explore on land with numerous hikes or bike tracks, as well as on the sea, with many aquatic sports options. A freedom also linked to its history (with the D-Day and battles of Normandy), which can be learnt and remembered in the several memorials and museums.

It has several sites inscribed on UNESCO’s list of world heritage of humanity: Mont-Saint-Michel and its Bay, the city center rebuilt by Auguste Perret in Le Havre and the Vauban observatory towers of Tatihou and la Hougue in Saint-Vaast-la-Hougue.Authenticity and sharing through its strong artisan tradition and traditional celebrations. Its culinary wealth is maybe the one which its habitants are the most proud of ! Who never heard of its famous cider, seafood, and camembert for example ?

The region is also strongly engaged on a sustainable development path, in terms of tourism as well as economic development, counting more and more green initiatives.
Bringing these green initiatives into tourism is vital for two main reasons :
This sector represents 6% of Normandy’s GDP and 38000 jobs.
According to the predictions, an increase in tourism in Normandy is expected for the coming years : the high temperatures and scorching episodes which are now recurrent, have the effect of attracting more and more tourists to Normandy looking for milder temperatures.
The increase in the number of tourists will lead to an increase in pressure on natural spaces, an increase in pollution, as well as conflicts of use on water and energy resources (for example, the pressure from tourism is the strongest in summer, when water resources are scarce).

By raising awareness on behaviour change and by involving multiple territories across Europe, ECHO-TOURISM wil 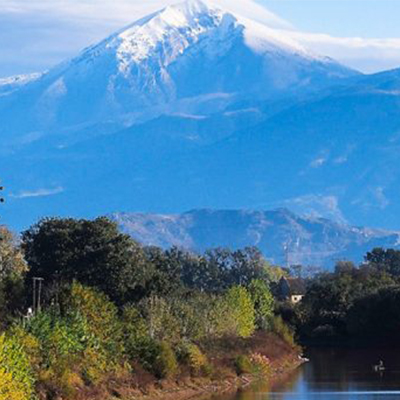 To know a bit more about…